The Night of Discovery keynote presentation will see notable scientists on a panel discussion about the human fascination with exploration and discovery. Lowell Observatory Director Dr. Jeffrey Hall will moderate this discussion, set to take place on February 18 at Flagstaff’s Orpheum Theater.

Other highlights of the 10-day festival include a science speaker series, space art show hosted by the International Association of Astronomical Artists, and special Pluto-themed products promoted by businesses throughout Flagstaff, such as the “Lowell Observatory Lager” limited edition beer by Mother Road Brewery.

In addition to Mother Road Brewery, several companies throughout Flagstaff are joining in during the month of February to celebrate the anniversary of Pluto’s discovery:

All events will be in-person*, and several will also be livestreamed. A full schedule of events and speakers will be available in January.

A VIP experience featuring a bus/walking tour of Pluto-related sites in Flagstaff will also be available. Seating is limited, and reservations are required.

Tickets may be purchased at the event webpage at iheartpluto.org

*Note: All in-person guests aged 12+ will need to show results from a negative COVID-19 lab test within 72 hours of visiting, or provide proof of full vaccination in lieu of a negative test. In-person events are subject to change or cancellation due to COVID-related restrictions that could arise. Please read more about Lowell Observatory’s COVID-19 protocols at lowell.edu/covid-19. 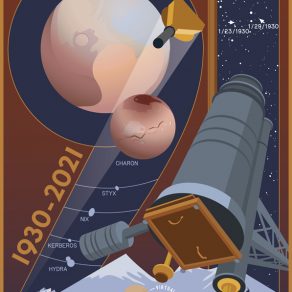 Flagstaff, AZ. – Lowell Observatory is pleased to present a celebration 91 years in the making: the 2nd Annual I Heart Pluto Festival. Retired NASA astronauts Nicole Stott and Ron Garan and New Horizons scientists Dr. Alan Stern and Dr. Will Grundy headline the event. This free, all-virtual celebration runs from February 13-18 and features a variety of talks, tours, an art show, and a ham radio event. The festival falls on the anniversary of Clyde Tombaugh’s February 18, 1930 discovery of Pluto at Lowell Observatory.

Stott twice flew to the International Space Station (ISS) and also worked aboard the Aquarius undersea habitat. Garan is a retired test pilot and fighter pilot who also twice flew to the ISS and lived on the Aquarius. Both are accomplished artists, and on February 15 they will take part in an open discussion about how they combine the awe and wonder of their experiences to inspire people around the world.

Stern, who led the groundbreaking mission to Pluto that revealed the true nature of this tiny world, kicks off the celebration on February 13 with the presentation “Why Pluto is a Planet, the Embarrassment of the IAU, and Why They Had it Coming”. Grundy is a planetary scientist at Lowell Observatory and will speak on February 16 about our current understanding of Pluto and its system of moons.

Clyde Tombaugh discovered Pluto on February 18, 1930, and since then scientists, artists, and the public have been enamored with this tiny world. Lowell Observatory created the I Heart Pluto Festival in 2020 to celebrate this scientific and cultural heritage. The event will be held around the discovery day anniversary each year, culminating in the 2030 centennial of Tombaugh’s monumental find.

The 2021 schedule is below. For complete I Heart Pluto Festival program details, including how to join the events, see https://iheartpluto.org/

*6-7 pm MST, “Why Pluto is a Planet, The Embarrassment of the IAU, and Why They Had It Coming”. Presentation by New Horizons Principal Investigator Dr. Alan Stern.

*6-7 pm MST, “When the Moon Hits Your Eye”. Tour of the U.S. Naval Observatory Flagstaff Station with facility scientists; special welcome by Charon discoverer Jim Christy and his wife (and Charon namesake) Charlene.

*“I Heart Pluto Art Show”, with members of the International Association of Astronomical Artists.

*“Hamming it Up”, with members of the Northern Arizona DX Association.

Lowell Observatory is a private, nonprofit 501(c)(3) research institution, founded in 1894 by Percival Lowell atop Mars Hill in Flagstaff, Arizona. The observatory has been the site of many important discoveries, including the first detection of large recessional velocities (redshift) of galaxies by Vesto Slipher in 1912-1914 and Clyde Tombaugh’s discovery of Pluto in 1930. Today, the observatory’s 17 astronomers use ground-based telescopes around the world, telescopes in space, and NASA planetary spacecraft to conduct research in diverse areas of astronomy and planetary science. Lowell Observatory currently operates multiple research instruments at its Anderson Mesa station, east of Flagstaff, and the 4.3-meter Lowell Discovery Telescope near Happy Jack, Arizona. The observatory also welcomes more than 100,000 guests per year to its Mars Hill campus in Flagstaff, Arizona, for a variety of educational experiences, including historical tours, science presentations, and telescope viewing.