Who Was Clyde Tombaugh? 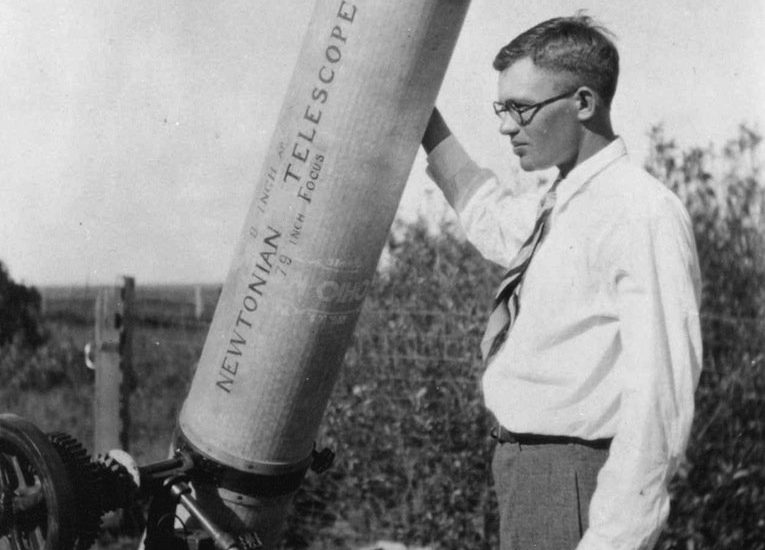 Photo: Clyde Tombaugh stands with one of his homemade telescopes.

The eldest of six children, Clyde Tombaugh was born on a farm near Streator, Illinois. He began helping his father around the farm at an early age, planting corn, threshing oats and wheat, and various other labor-intensive tasks. He loved reading in his spare time, particularly on the subjects of geography and history. Exploring the world, both in the past and the present, helped make small-town farm life feel a little less small. When Clyde reached his teenage years, however, the world wasn’t enough—the thought of what lay beyond it captured his imagination, and astronomy took over as his favorite interest. Clyde was lent a three-inch telescope and an astronomy book by his Uncle Lee. Clyde would later say it was this book that introduced him the astronomers who would become his heroes: Galileo Galilei, William Herschel, and Percival Lowell.

In 1920, Clyde’s father and uncle purchased a 2¼ -inch telescope from Sears-Roebuck, which Clyde would use to view the cosmos as often as he could. Two years later, the Tombaugh family relocated to Burdette, Kansas, in search of better farming conditions. There, Clyde was overjoyed to discover that the dark skies provided ideal viewing conditions for his telescope.

Clyde became adept at building his own facilities to suit his various interests around the farm, including a football field and tennis court in the family’s pasture, and of course, his own telescopes. The first telescope he built was an 8-inch reflector, constructed with pine board tubes and repurposed farm machinery. Without a temperature-constant environment to test the telescope in, the final product fell short of Clyde’s expectations. To improve his mirror-making capabilities, he used a pick and shovel to dig an underground testing room that doubled as a storage cellar and tornado shelter. After he cemented the walls and ceiling, it became the perfect place to grind telescope mirrors into the right figure.

Clyde Tombaugh, standing at the entrance to the Pluto Discovery Dome.

In February of 1927, he built a 7-inch reflector that he sold to his uncle. He used the money to begin building a 9-inch telescope, which he finished early in 1928. That same year, the Tombaugh family’s crops were destroyed by a hailstorm, and Clyde realized that the farm life wasn’t for him. He was offered a job by a Wichita telescope maker, but before he could accept it, an even better offer fell into his lap. Clyde had been reading some of his older issues of Popular Astronomy Magazine when he saw an observation report on Mars written by staff members from Lowell Observatory. Inspired, he sent some of the drawings he’d created while observing the planets to V.M. Slipher, then Lowell Observatory’s director. After exchanging several letters with Slipher, Clyde received one that would change his life forever. In it, Slipher offered him a position at the observatory on a trial basis, stating that if he could prove his worth to the observatory, he would be offered a more permanent position there.

As we now know, Clyde would go on to discover Pluto, the fabled “Planet X” that Percival Lowell had spent much of his life searching for, within a mere few months of rekindling the search. He then earned bachelor’s and master’s degrees in astronomy from the University of Kansas, fulfilling his lifelong dream of attending college. Clyde would study astronomy for the rest of his life, even after leaving Lowell Observatory in 1945. He taught astronomy at New Mexico State University from 1955 until his retirement in 1973. During World War II, he contributed his experience to the effort by teaching naval personnel navigation at Northern Arizona University and working at White Sands Missile Range. He was inducted into the International Space Hall of Fame in 1980. He died on January 17, 1997, in Las Cruces, New Mexico, at age 90. A small portion of his ashes was placed aboard the New Horizons spacecraft, which flew by Pluto in 2015.