This Week in Astronomy History | Feb. 1-7 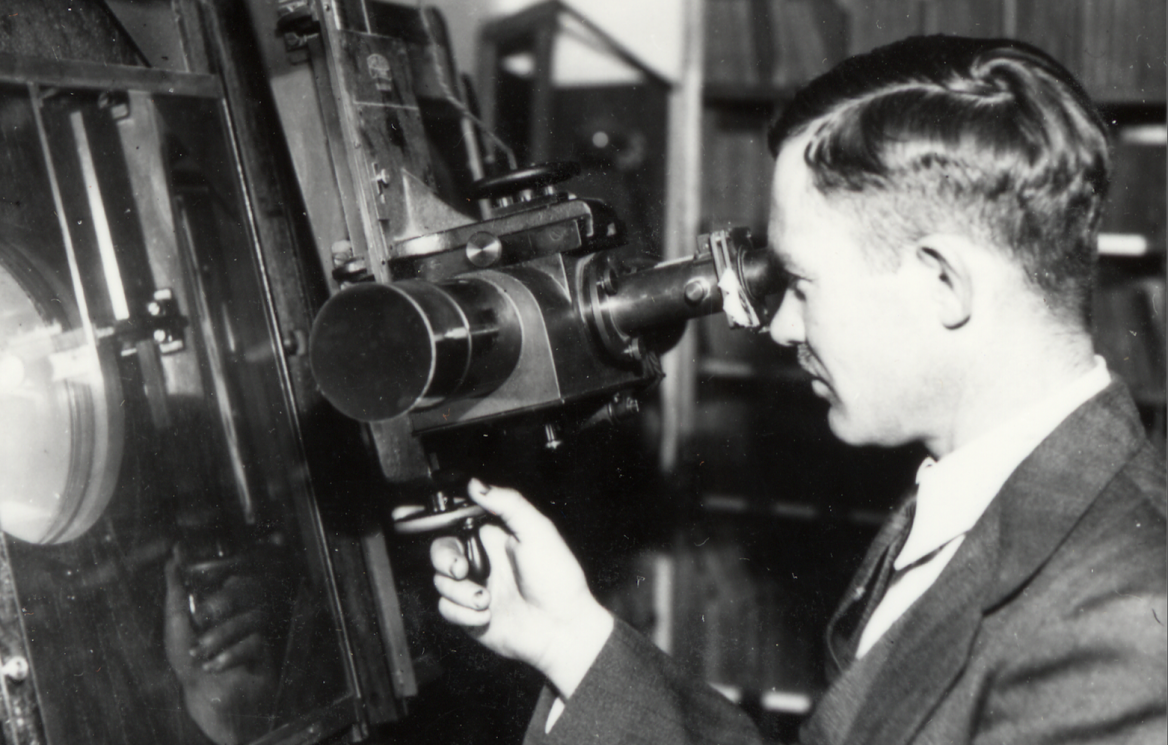 On February 2, 1964, the Ranger 6 probe was deliberately crash-landed on the surface of the Moon to obtain up-close, high-resolution photos of the lunar surface during the final minutes before impact. The probe made impact in the Sea of Tranquility, a lunar mare1 located in the Moon’s Tranquillitatis Basin. The probe carried 6 television cameras, each containing their own power supply and transmitter to ensure the highest probability of success. However, due to a failure in the probe’s camera system, no images could be returned to Earth.

1 A lunar mare (plural “maria”) is a large, dark, basaltic plain on Earth’s Moon, formed by volcanic activity. They were called maria (Latin for “seas”) by early astronomers who mistook them for bodies of water on the lunar surface.

Astronomer Clyde Tombaugh was born in Streator, Illinois on February 4, 1906. He is best known for his groundbreaking discovery of dwarf planet Pluto, then considered to be the 9th planet in our solar system, at Lowell Observatory in February of 1930. At the time of his discovery, Tombaugh was just 24 years old. He is also credited with the discovery of several asteroids, many of which were found as a byproduct of his search for Pluto and other celestial objects. Tombaugh stands with one of his homemade telescopes | Unknown (Public Domain)

Tombaugh built his own telescopes from scratch while living on a farm with his parents in Burdett, Kansas. He was offered at job at Lowell Observatory in 1929 after sending sketches of Mars and Jupiter based on the observations he had made with his homemade telescopes. After discovering Pluto, he went on to earn a bachelor’s and master’s degree in astronomy at the University of Kansas, fulfilling a dream that had once been dashed by a storm that destroyed his family’s crops.

Tombaugh received many honors and awards both before and after his death, including induction into the International Space Hall of Fame and the naming of the Tombaugh Regio, a heart-shaped surface feature of Pluto.

A particularly eventful day in astronomy history, February 5, 1971 saw the Mariner 10 space probe make its closest approach to planet Venus and the 8th manned mission in the Apollo program, Apollo 14, complete a successful landing on the surface of the Moon.

Mariner 10 was a robotic space probe launched on November 3, 1973, with a mission to complete flybys of Mercury and Venus and gather data on their environments, atmospheres, surfaces, and characteristics. It made its closest approach to Venus on February 5, 1971. After making its closest approach to Mercury on March 29, 1974, Mariner 10 became the first probe to successfully perform flybys of multiple planets, as well as the first to complete a dual-planet gravity assist mission.1 Alan Shepard standing with the American flag on the Moon | Edgar Mitchell, NASA

Apollo 14 astronauts Alan Shepherd, Edgar Mitchell, and Stuart Roosa began their journey to the Moon on January 31, 1971, touching down on the lunar surface 5 days later.

During their two surface walks, Shepherd and Mitchell collected Moon rocks and performed several scientific experiments. Perhaps most notably, Shepherd hit two golfballs he’d brought with him with a makeshift golf club. Meanwhile, Roosa remained in orbit to conduct experiments and photograph the lunar surface. At the request of the National Forest Service, he brought hundreds of tree seeds with him on the mission to be planted upon his return. The three astronauts touched down safely in the Pacific Ocean on February 9.

1 In the case of the Mariner 10 mission, the probe used Venus’s gravitational pull to “slingshot” itself toward Mercury. Clementine (originally the Deep Space Program Science Experiment) was a lunar orbiter and asteroid probe launched by NASA and the Ballistic Missile Defense Organization on January 25, 1994. Its mission was to make detailed observations of the Moon and nearby asteroid 1620 Geographos, while also testing the effects of long-term exposure to space on its sensor and components. It failed to reach the asteroid because of a system malfunction, but was able to collect ultraviolet and infrared images of the lunar surface and measure various aspects of the Moon’s gravity and atmospheric pressure. Using data gathered by Clementine, scientists were able to create a detailed profile of conditions on the Moon’s surface.

The probe’s name was derived from the popular American folk ballad “Oh My Darling, Clementine,” as it would be “lost and gone forever” after its mission was over.